Hungry but can’t be bothered to cook? This dilemma visits the Haus of FGV often and forces me to enjoy uncomplicated meals from time to time. 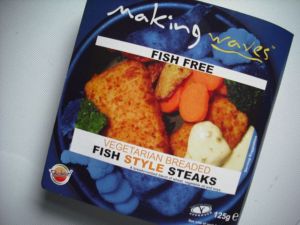 A few evenings ago, Josh and I were prettying ourselves for a fabulous night out in London. Plans were afoot for an evening of hilarity with singer/comedian/actor Sandra Bernhard at the Leicester Square Theatre followed by camp shenanigans as ex-Dead or Alive front person Pete Burns turned out a midnight PA at The Eagle in Vauxhall. It was going to be a big one so we were in need of sustenance before our wild night. With not much time to spare and even less enthusiasm for food preparation, we opted for a fishless sandwich.  It was fast, tasty and animal-friendly.

Redwood is the prepared/semi-prepared food company owned by Heather Mills. Mills purchased the vegan company in 2009 using her divorce settlement money from Paul McCartney. The company produces some of the best vegan deli items in the world including cheese, bacon, fish fingers, chicken bites and so much more. 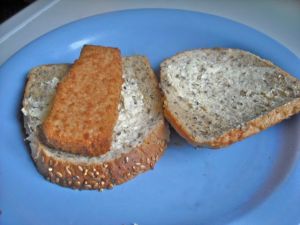 Redwood fish style steaks in a sandwich... simple and quick

On this particular camp and lazy night we opted for the Fish Style Breaded Steaks, lightly grilled and served on seeded bread smeared with vegan margarine. The snack took less than 5 minutes to prepare and was delicious. The steaks are crunchy on the outside with a perfectly-crafted fish-like centre. If we weren’t so lazy, we could have whipped up some vegan tartare sauce and our sandwich would have been perfect.

Overall, it was a winning night. Sandra was biting and witty and hilarious. Pete tore through a five song set in front of a delirious nightclub. And I got to eat a delicious vegan snack without expending much energy.. and that’s the way I like it.