As I am busy preparing for London Vegan Drinks (that is, harassing people via email and Twitter), Josh has kindly stepped in to keep you informed of vegan eats and drinks in the town of Oxford.

Take it away, Josh.

Last Friday I had the good fortune to visit the English town of Oxford as part of my work commitments.  Set in the rolling green hills of Oxfordshire, this pretty settlement is famous for the many colleges that make up the University of Oxford – one of the most recognised institutions in the world and alma mater to many notable people including Lewis Carroll, Oscar Wilde, C.S. Lewis, J.R.R. Tolkien, T.S. Eliot, Stephen Hawking, Bill Clinton, Tony Blair, David Cameron, Margaret Thatcher and so on. 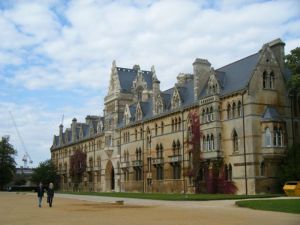 Despite the vile political leanings of some of its alumni, Oxford is a charming town with an innumerable number of impressive stone buildings and appealing alleyways.  Students at the university are banned from driving cars into the centre of Oxford so instead they take to riding bicycles which gives the town a quaint, relaxed vibe.

Having some free time for lunch, my colleagues and I headed north from the centre of town and after walking for about 15 minutes came to a pub called The Gardener’s Arms in an historic area of town named Jericho. I had previously read about this pub on HappyCow because it houses The Garden vegetarian restaurant. It is set on a quiet residential street and apart from the sign, it wouldn’t be obvious that this was a drinking establishment – it looked more like someone’s house which is a theme that continued inside.  Stepping through the doors, the pub had a homely, welcoming feel with natural light and comfy-looking chairs and sofas dotted around the place. 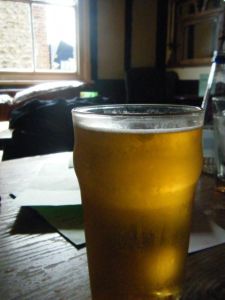 Wasting no time, I scanned the menu and ordered the vegan burger with lettuce, relish and mustard.  If I’d had more time I would have tried some of the larger dishes like the Indian Thali Platter or the Medley Mushroom Pie… but alas time was in short supply.  Nevertheless, I figured there was no harm in ordering a glass of something alcoholic while waiting for my food and the barman was incredibly helpful and knowledgeable about which beers and ciders were vegan (and also informed me that none of their wines were vegan).  I settled for a pint of Thatcher’s Gold Somerset Cider which hit the spot perfectly while I waited for my food.  While sipping my cider (which was delicious by the way), I had a closer look at the impressive collection of vinyl albums on display and browsed through the free DVD library (you can take any DVD as long as you replace it with another).

The burger was served in a soft, white bun and stood perched on top of a basket of fries which were hot, crispy and cooked to perfection.  The burger (or burgers I should say because there were two vegan patties inside) was good – tasty and filling, but it was the fries that really stole the show in my opinion.  Not only were they delicious but it was a decent-sized serving as well. 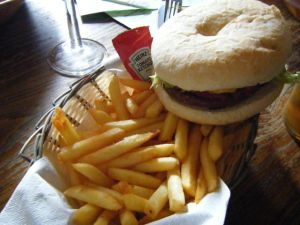 Overall I was really impressed with The Garden – the food was good, decently-priced and served quickly.  The interior was relaxed and comfortable and the staff friendly and helpful.  My only wishes were that they stock a vegan cheese and vegan wine but even without, I left very satisfied.

Just as I was leaving, I visited the bathroom and discovered that there is a huge and inviting beer garden at the back of the pub which would be glorious for warm summer evenings with friends, food and fermented beverages.  All the more reason to return.

The bar at The Gardener's Arms, Oxford

The Garden at The Gardener’s Arms

Fat. Gay. Vegan. Vegan everything including events, beer, food, PR and travel.
View all posts by fatgayvegan →
This entry was posted in I'll pay you to cook for me, I'm getting drunk for you, Provincial towns you jog round and tagged burger, cider, fries, Jericho, Oxford, Oxfordshire, Thatcher's Gold Somerset Cider, The Garden, The Gardener's Arms, vegetarian pub. Bookmark the permalink.