Unless something drastic happens such as a Veggie Grill opening in Soho or a Native Foods Cafe popping up on Regent Street, I will probably never again eat vegan food in another central London location other than Koshari Street.

Koshari Street is what vegan London has been lacking. Affordable, quick and incredibly tasty food to eat on the go. Every single person I know who has eaten there cannot sing its praises loudly enough. It is beyond game changing. It is the best vegan food in central London.

Now koshari itself (often written as kushari) is not unknown in these parts but serving a vegan version in a cup in London is novel indeed.

Koshari is an Egyptian dish made from a mixture of pasta, rice and lentils topped with a tomato-based sauce. The Koshari Street version also features garlic sauce, chickpeas, doqqa (spice and nuts ground into a sprinkle) and a tower of delicious fried onions. 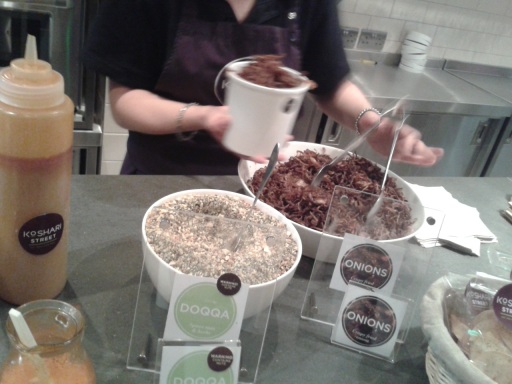 You get to be in charge of the heat level of the spices. I have decided to stick with ‘mild’ for a while, but I am hoping to progress onto ‘hot’ or ‘mad’ in the near future.

The restaurant has limited indoor seating but the dish is very handy for strolling around the West End as you savour the flavours. The company website allows you to order in advance for quick pickup or you can even explore their delivery service.

Of course I am open to another food outlet coming along to claim the title of best vegan food in central London. However, with Koshari Street now on the scene I no longer feel the sense of urgency for quality food I once did in the capital.

Koshari Street is not a completely vegan restaurant. They serve a non-vegan wrap and some dairy milk-based desserts. The restaurant is located at 56 St. Martin’s Lane, just a two minute walk from Leicester Square Underground station. They are open until 11pm 6 days a week and closed on Sunday.

Fat. Gay. Vegan. Vegan everything including events, beer, food, PR and travel.
View all posts by fatgayvegan →
This entry was posted in I'll pay you to cook for me, London can you wait?, Vegan and tagged Egyptian, koshari, kushari, London, review, street food, vegan. Bookmark the permalink.