Maybe you saw the homophobic tweet posted to the Beyond Meat Twitter account sometime over the last 48 hours. I found it very upsetting and have reproduced it below for the sake of this post. 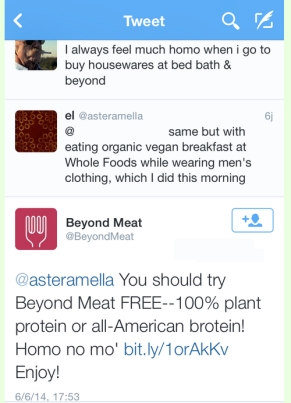 I found it shocking, upsetting and a complete curveball to see something so blatantly homophobic posted on a social media account of one of the biggest (the biggest?) new vegan companies on the planet.

The response from Beyond Meat was suitably swift and full of emotion. The company worked quickly and decisively to rectify the situation best they could, reaching out to every single person who expressed concern with a response similar to the one they sent me.

Unlike many company apologies due to social media scandals, I personally take the Beyond Meat response and apology to be sincere and heartfelt. If they are guilty of anything, I believe it is outsourcing or not keeping a tight enough hold on their social media.

They are responsible for the above situation. There is no getting around that, but it does appear to me they are attempting to take responsibility for a situation that upset countless people and could have caused irreparable damage to their brand.

Even though this homophobic tweet took me by surprise, I have noticed a pattern in the Beyond Meat Twitter timeline that highlighted that maybe their best person wasn’t on the job.

If you are working with or on behalf of a vegan company, you need to know your stuff. Obviously not as damaging as the homophobic tweet, but in my opinion still embarrassing, was the Twitter exchange with celebrated activist and writer Carol J. Adams.

Adams, who is a longstanding legend to many in the vegan community and beyond, was congratulated by the Beyond Meat Twitter account on what it perceived to be her recent decision to switch to a vegan diet and was rewarded with a voucher for a free product. 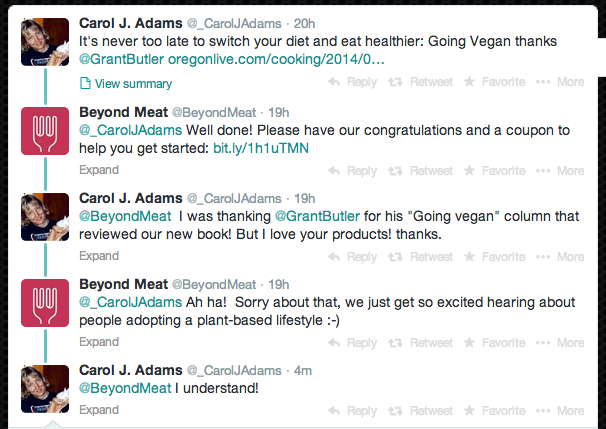 Adams clearly took the mistake in good-humoured stride and thanked the company for their generosity. I include this exchange here to show how easy it is for a company to lose credibility within its core customers by employing people to be a public voice who are not in touch with its core ethics or audience.

Hopefully this latest Twitter storm will have shown Beyond Meat how crucial it is to employ trustworthy, aware, compassionate and progressive people to be their voice of social media.

SO, that’s the end of that chapter. Let’s move on.

I was offended by the Beyond Meat tweet so I publicly reached out to them about the content of the tweet. They responded in a way that made me feel heard and understood. This transparent process is how it should be. Beyond Meat took responsibility for the situation and didn’t once try to diminish the severity of the situation. They didn’t play the ‘but we are vegan so we are nice’ card for a moment.

Following on from my initial tweet about the homophobic message, I received a number of responses telling me it was no big deal or how wonderful Beyond Meat are to animals. Take for instance this message sent to me from one of the founders of vegan restaurant chain Veggie Grill.

(Please note: this message seems to have more parts but they have been deleted by the sender)

Veggie Grill want to give a character reference for the founder of Beyond Meat. Good for them. I understand. But telling me Ethan is a friend to animals as a response to my concern of a homophobic tweet makes me feel belittled and offended.

My reaction to a homophobic tweet has nothing to do with how compassionate to animals Ethan of Beyond Meat is or is not. If he was not in charge of a groundbreaking vegan company, would the tweet from his company be suddenly more offensive?

I think Ethan is doing a fine job of tackling this issue and such apologetic messages from his supporters appear to be using his veganism as a way to negate the impact of the original offensive tweet. I think he would be best left to fight his own battles.

Veganism does not stand alone. There are many issues and social problems that intersect. When someone calls out a vegan for being sexist, homophobic or racist it is extremely unhelpful to use veganism as a get out of jail free card or a way to lessen the blow.

As a shining example of this, I leave you with a message sent to me by somebody running the PETA UK Twitter account. I raised a concern publicly that I found a lot of their campaigns to be sexist and damaging to society.

The response I got was a classic example of trying to shut a concerned person down by playing the compassionate vegan card, except this time they also told me I was not helping animals by targeting their sexism.

Vegan companies can and should take responsibility for non-inclusive language and actions, no matter how many animals they have saved.

Fat. Gay. Vegan. Vegan everything including events, beer, food, PR and travel.
View all posts by fatgayvegan →
This entry was posted in Haus of FGV, Vegan and tagged Beyond Meat, homophobic, peta, Veggie Grill. Bookmark the permalink.

21 Responses to Beyond veganism